Growing up in Los Angeles, I didn’t know much about German Romantic poetry. I did read some Goethe and Heine (because I had excellent high school German teachers) but I didn’t exactly grasp the scope of that literary movement. And I couldn’t have guessed that those poems would change my life. (Mendelssohn portrait from Linda Hines’ blog)

Professor Höll is an inspiring musician, famous for his recordings with Dietrich Fischer-Dieskau and Mitsuko Shirai and Renee Fleming.  And his music doesn’t sound like anybody else’s.  He has his own sound; his interpretations are always creative and original. The students at the Mozarteum had tremendous respect for him. They only wanted to show him their very best stuff. And to do that, they had to first understand the poems that the great composers had set to music.

Fortunately, poems were thick on the ground in Austria! People were always throwing around names like Eduard Mörike and Hermann von Gilm zu Rosenegg (which is a long name to throw around).  I found that I could absorb a great deal of information just by standing around and eavesdropping on conversations! That’s how I discovered the Heidelberg poets like Brentano, Arnim and Eichendorff.

There is a special pleasure in reading poetry in a second language. It feels mysterious, like cracking a secret code. You have to let the words linger a bit longer in your mouth to catch the full flavor, but it’s worth the wait. I was floored when I first read Nikolaus Lenau’s “Frühlingsblick” out loud. I was so… READ MORE. 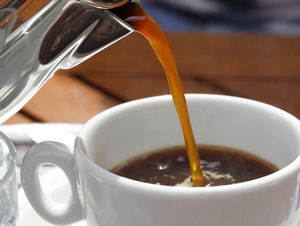 It tastes bitter at first, but it’s incredibly addictive.

To the English ear, it is not the most beautiful of European languages. But at least it has some bite!

This authentic picture of German coffee is provided by Research in Germany.

My grandfather was German and I was familiar with the sounds of German before I ever studied the language. I had the rare chance to learn German in an American high school, and it changed my life. German opens whole new worlds of opportunity, not only for engineers and business people but also for scholars and musicians! Still, it was not until I moved to Austria (at the age of 20) that I realized that German could be habit-forming.

Gutteral sounds are not the most pleasing to hear, but they are extremely satisfying to say!  And if you crave elegance, you can find it in German’s pure, round vowels. Best of all, the explosive consonants give the listener a special rhythmic pleasure that is absent from, say, French. German snaps and crackles and pops!

In my first few months in Salzburg, I let the German language seep into every corner of my mind. I limited my contact with my English-speaking friends and insisted on only speaking German to my professors and colleagues. All of my courses at the Mozarteum were taught in German and the lingua franca of the cafeteria was German. My brain adapted to my personal linguistic experiment.  By the end of my third year in Austria, I was thinking and dreaming in German.

My parents were a little alarmed when I first came home for vacation and had to search for English words. But it provided a lot of spontaneous humor at the dinner table.  Naturally, the brain adapts (again!) very quickly to conversation in its native language. And all of this brain exercise is very healthy; recent studies indicate that people who are bilingual have higher cognitive function and better long-term brain health.

Of course, I was studying music, and music has a way of getting under your skin. By singing German opera and German Lieder (art songs), I ensured that German would stay in my soul forever.  There is a deep beauty in German Romantic poetry that has been set to music.  Du holde Kunst, ich danke dir dafür!

So why is German considered so difficult? It has a relatively small vocabulary, but a very sophisticated grammatical structure. That’s why German is not the easiest language for an English-speaker to learn, even though English is a Germanic language. I made a ton of mistakes while learning German — and I still do!

But now, I have a tender spot in my heart for German syntax. I even get nostalgic for the sound of the Austrian dialect. If I stay away from Austria for too long, I have to feed my German addiction by reading German novels and watching Austrian TV programs.

It insinuates that German is not as pretty as other European languages. Which is true!!!

But German has its own crackling energy. So be careful the next time that you pick up a German book, or start talking to a German friend. German is extremely addictive.  You might just like it!