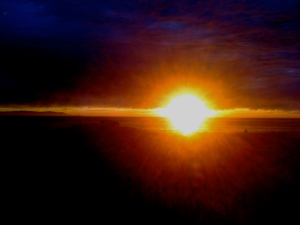 Here in Los Angeles, the sun will set over the ocean at  precisely 8:02 PM this evening. I’m sure it will be spectacular.

But in St Petersburg, Russia, the sun will not set until just before midnight. When you are that far north, summer days never end. June is a magical time in St Petersburg, when nighttime only lasts a few hours, and the darkness isn’t very dark.

Back in June 2007, I got to experience the famous “White Nights” of St Petersburg. I was in Russia to compete in the XIII International Tchaikovsky Competition in Moscow, an unforgettable experience.

But since my father had been invited to St Petersburg as a  guest professor, I decided to go there first. After all, this was my chance to experience the Winter Palace, the Hermitage, and the Mariinsky Theatre. Like any musician preparing for a major competition, I would spend several hours a day practicing… but why stay home when I could just as easily practice my music in this glorious city?

Instead of just singing Tchaikovsky arias, I got inside them. 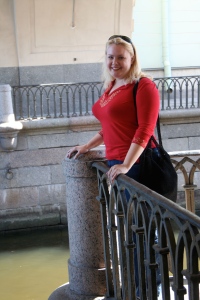 I stood at the very place where Liza throws herself into the river Neva in the final act of Queen of Spades. I sang inside a Russian church. I practiced reading the Cyrillic alphabet as I walked around the city, slowly sounding out words like интернет (internet) and ресторан (restaurant).

I strolled down Nevsky Avenue almost every day, visiting every cathedral and every shopping mall. I took a canal cruise. I saw DaVinci’s Madonna Litta at the Hermitage. I went to Dostoyevsky’s house. I attended the Kirov ballet. I toured the czar’s Summer Palace.

But there was one thing I still had to do: I desperately wanted to see a Tchaikovsky opera at the Mariinsky Theatre. I had tickets for Eugene Onegin.

I was staying with my parents in a little budget hotel called the Vyborgskaya. We were living in cramped quarters and it wasn’t very clean.  It had been an especially hard day; my dad had injured his foot, so walking around town was not very comfortable. We’d had to wait in long lines to buy subway tickets, and whenever we finally got to the front of the line, the clerk would pull out the “technological difficulties” sign and disappear! I was also feeling a little queasy because I had eaten a questionable meat pie at a local bakery. But I was still looking forward to the opera.

When we got back to the hotel, we were informed that we had to change rooms unexpectedly.  The maids had already begun to move our luggage out into the hall to make room for another guest! Meanwhile, we had been assigned to an even smaller room, featuring three little cots and one coffee table. There was no time to be outraged about any of this because in all the confusion, we were now late for the opera.

We stood outside the hotel in despair, trying to flag down a taxi at rush hour.  Finally, a friend asked us if we would be willing to take an “unofficial” taxi. We shrugged and said yes. Our friend told the driver to take us to the opera house… as fast as possible. And that’s how we ended up climbing into a strange unmarked car.

Before we could fasten our seat belts, the car sped off with a screech of tires. Our driver zigzagged around corners and through intersections at breathtaking speed. I had never flown across a suspension bridge that fast. (Of course, I had not yet experienced traffic in Kathmandu.) We were speechless, but this pirate taxi driver took his assignment very seriously: he had been told to get us to the Mariinsky as fast as possible. And he did.

We were dizzy when we got out of the car, but we did make it there on time.  The driver was grinning from ear to ear. We gratefully handed him some extra rubles for his race car skills. Finally, we stumbled inside the gorgeous auditorium with its rich interior and blue plush velvet seats.

And the music was electrifying. What could be better than hearing a Russian orchestra play Tatyana’s letter scene? I don’t think I can describe the sound of the violins surging with perfect Slavic passion. There are no words for that. It was an exquisite performance.

And even after all of that, we still made it back to the hotel well before sunset. I remember the sunlight shining on the river as we drove back across town.

So whenever June rolls around, I always think about the White Nights of St Petersburg… and my wild ride to the Mariinsky!