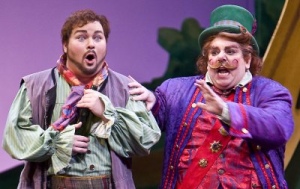 Why does music make us feel better?

Opera is medicinal, and not just because there are sometimes “doctors” onstage! In this image, Dr. Dulcamara dispenses potions to Nemorino (Robert McPherson) in Donizetti’s L’elisir d’amore. But there is serious evidence that music plays an important role in physical and mental health.

Music therapy has produced some exciting results. The Los Angeles Times recently reported that music therapy can reverse the symptoms of a wide variety of disorders, from dyslexia to Parkinson’s. It even improves the outcomes of patients with brain trauma!

In the ancient world, no one questioned the link between music and medicine.  The ancient Greeks treated patients with melodies, and they considered Apollo the god of both healing and music. Traditional Chinese medicine used particular pitches to heal diseases; in fact, the Chinese word for medicine comes from the word for music!  And in the Bible, David practices a form of music therapy when he soothes King Saul’s rage with his harp.

Thousands of years later, music therapy still has a profound effect on mental health. It can even help victims of severe emotional abuse. My talented cousin, Devon Feldmeth, will be doing drama and music therapy with orphans and former child soldiers in Uganda this summer! Click here to learn more about her project.

In Tibet, healers use sound bowls to cure their patients of both physical and emotional distress. 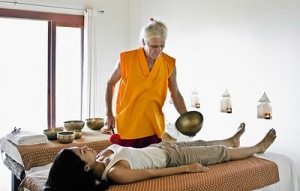 At this clinic in Thailand, singing sound bowls are a part of therapy. The vibration is meant to restore the body’s natural balance.

But it is a misconception that music therapists only use the type of  “new age” music you might hear in an incense-scented massage room.  Sometimes, the very best results happen when the therapist plays the music that the patient loves most.  Watch this dramatic transformation when an elderly man listens to his favorite songs:

In Sweden, some opera singers make house calls!  If you are depressed in Stockholm, you can apply to have an opera singer come and sing an aria for you in your living room.  The arias are from traditional operatic literature and they are chosen to address certain emotions and situations.  The program has been especially effective for couples who want to resolve conflict. It’s called Opera Aid.

As a group, opera singers tend to believe in the healing power of the human voice!  We actually “self-medicate” by singing, and we find joy and energy in our music every day. Is this because of the emotion in the music?  Or is it the vibration of the frequencies that we sing? Or does singing really soften the soul?  Whatever the reason, music is pretty powerful stuff.

So next time you’re feeling under the weather, try some opera therapy! Crank up the Puccini, or ask your favorite singer to give you a live performance. You might just find that music is therapeutic, both in the sound itself, and in the space between the notes. “Music hath charms to soothe a savage breast, to soften rocks, or bend a knotted oak.” William Congreve