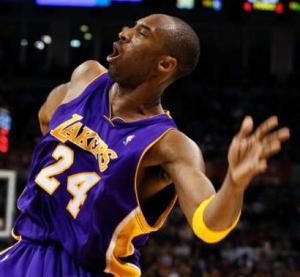 Everyone’s still talking about the Superbowl.  But I’m thinking about basketball, mostly because I got to experience my first Lakers game last week.

Since I’m a native of Los Angeles, it’s a little embarrassing that this was my first trip to see the boys in purple. But basketball tickets are more expensive than opera tickets! And I do spend a lot of time in other cities.

As a newcomer to the Staples Center, I was dazzled by the spotlights on the basketball court.  And I enjoyed seeing “my” team in action. But I was most impressed by the Black Mamba himself, Kobe Bryant. (Photo courtesy of http://ambasketball.com)

In fact, I learned a lot about singing from Kobe.  (Just by watching him play basketball!)  Here’s what I took away from the game:

3 lessons that opera singers can learn from Kobe:

Kobe Bryant is an elite athlete.  He has extraordinary talent, and he has put in thousands of hours of hard work. But he makes it look easy.

And that is the kind of effortless athleticism that makes a great singer.  To be a professional opera singer, you need to train your body like an athlete, train your mind like a scholar, and train your imagination like a painter. But the greatest challenge is to pursue excellence in all of those areas without ever getting tense!

Kobe manages to stay relaxed under tremendous pressure.  If he were coaching a young opera singer, I think he might say: keep your standards high, but stay loose. Don’t worry about anything. Sing with the same confidence that you have when your team is 40 points ahead.

Of course, Kobe exudes confidence on the court because he’s actually having fun.  It’s obvious that he loves this game. That playful feeling is often lost by opera singers, somewhere around their third year of conservatory training, when they become obsessed with vocal technique and forget why they started singing in the first place. But to an audience — even the most sophisticated audience — there’s nothing better than watching someone who simply loves to play the game.  Never lose the joy.

The word “diva” has some negative connotations, and with good reason! Nobody wants to work with someone who is demanding and self-centered, whether it’s on the stage or on the court.

But let’s be honest: it’s no fun to work with artists (or athletes) who have no personality, either. There’s nothing less exciting than an opera where every singer has exactly the same sound, produced in exactly the same way.  We can do better than that!

I’m a pretty cheerful person, but I don’t want my life to be entirely “drama-free.”  I’m not advocating selfish or unkind behavior; that is never appropriate. The first rule of the theater is to respect your colleagues! But I think that opera singers should live boldly. If you’re too frightened to “make a scene,” how can you ever produce a gran scena onstage?

It’s true that basketball stars’ salaries are inflated, and opera stars’ egos are inflated. But we do need stars.  We will always need leaders who have the audacity to take risks and, yes, the self-indulgence to say something original. That’s the kind of energy that makes magic, on every playing field.

Kobe is a bit of a divo, and that’s part of his appeal. He even speaks Italian, which definitely makes him more operatic. So I am grateful to Kobe for giving me an excellent voice lesson, and I hope you enjoyed it, as well. Ciao!